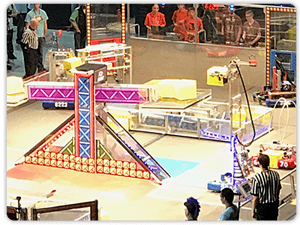 As we entered the UWM Panther Arena, we immediately felt the energy of a big athletic event. The cheering fans, lights, banners, mascots and loud music all made it seem as though an NCAA basketball game was about to begin. Instead, it was the 2018 FIRST Robotics Wisconsin Regional Competition. We were invited to attend by Debby Oakes, a Mentor for the combined Brookfield East and Brookfield Central High Schools FIRST Robotics Competition Team 2202 'BEAST Robotics.'

FIRST stands for 'For Inspiration and Recognition of Science and Technology' and is an international competition for students of all ages. FIRST Robotics was founded in 1989 by Segway inventor Dean Kamen in the hopes of getting kids excited about engineering and technology by turning robot-building into a competitive event with the thrill of other high school sports. Since then it has grown into an international event with 3600 High School teams comprised of 90,000 students. 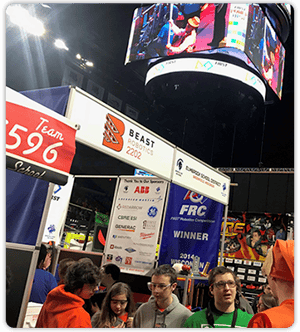 Faced with the growing problem of more STEM (Science, Technology, Engineering and Mathematics) jobs than qualified people to fill them, FIRST Robotics has also achieved off the charts popularity among engineering and technology companies. A growing list of companies are getting behind the program with meaningful sponsorship partnerships — providing assets to support the teams and in turn gaining access to the bright minds of the future as their next intern class. They see it as a great way to get kids interested in a STEM career.

Each year's competition centers on building a robot to complete a series of tasks. Just steps inside the Panther arena we met two enthusiastic parents who were more than happy to explain the rules for this year's game. FIRST POWER UP! is the name of the game for the 2018 season. The competing robots are on the floor of the arena in what is known as the 'Arcade'. Teams operate their robot through remote control outside the Arcade. The robots place cubes on large balancing scales to tip the scale and gain ownership for points. At the end of the match, robots can climb a tower attached to the balancing scale to gain extra points. It was an impressive sight to see! 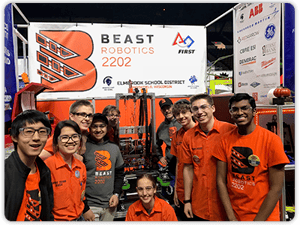 Congratulations to Team 2202 BEAST Robotics on a successful year! It was incredible to see their leadership and problem-solving skills in action. They won numerous awards including the Engineering Inspiration Award, which recognizes the effort to spread a passion for STEM in their local community. Amber, a junior on the team, also won a Dean's List Finalist spot. At the World Championship in Detroit, the team won their division Innovation in Control Award sponsored by Rockwell Automation.

On top of all that, they partnered with Goodwill to run an Electronics Recycling Drive for their school community. As they focus on creating new technology, we appreciate their commitment to environmentally-conscious and secure recycling of old equipment. The students were glad to know items they donated could be refurbished and help close the technology gap. The students were also amazed to learn what a cordless home phone base looked like or what a fax machine was!

It's exciting to consider what the future holds for these talented students. One parent summed it up with a quote from  Dean Kamen, "We have the only sport where every kid can turn pro!"

Julie joined Goodwill Industries of Southeastern Wisconsin, Inc. as Manager of Sales and Business Development in 2013. She brings more than 15 years of management experience in the healthcare and consumer packaged goods industries. She received her MBA from the Kellogg School of Management, Northwestern University and her undergraduate degree from the University of Wisconsin.
Find me on:
LinkedIn