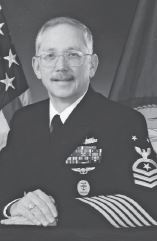 Goodwill is proud to support and employ veterans like Stephen Gielczyk, HR Generalist at Naval Station Great Lakes. He is one of six siblings (out of eight) that enlisted in the Navy, saying that he never considered another branch of service. Over 40 years ago he joined the Navy, spending 30 of those years traveling all over the world!

Boot camp, while tough, instilled important values like discipline, willpower and teamwork – skills he would use many times throughout his career. He studied and became an Electronics Technician. Steve said, “Communication is vital. If the encryption equipment onboard is inoperable, that ship is blind, cut off from other ships and even the Pentagon.” Keeping communications open was a 24-hour responsibility and if machines malfunctioned at 2 a.m., Steve could expect a call. Those early morning assignments didn’t really expand his technical knowledge, but he did learn important, intangible character traits from them. Things like dedication, responsibility and dependability are skills he would apply to his active service duty as well as life in general.

Steve recounted numerous occasions where Navy crews pitched in to help others with no other motive than to lend a helping hand. It meant volunteering and community service. He and his shipmates installed indoor plumbing at an orphanage in Bali and repaired furniture at an orphanage in Korea and painted walls at a Ronald MacDonald House in Hong Kong.

He had an assignment which included oversight of 14,000 other technicians and was responsible for setting up all the data communications for President Bush’s visit to Bahrain. He also moved into an instructor role, training hundreds of other electronic technicians at Naval Station Great Lakes, a chance to not only pass on his technical skills and knowledge, but also an opportunity to show others just how important those “intangible character traits” would be in their lives.

For all of his efforts, Steve received two Navy Commendation Medals, four Navy Achievement Medals, one Meritorious Service Medal, and many other distinctions! But he doesn’t consider them his biggest achievement. It’s rolling up his sleeves and working alongside fellow shipmates that mattered most. Steve said, “It’s really about people from all different backgrounds, working together, to get things done.”