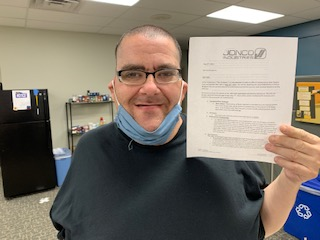 During the summer of 2019, Sam expressed an interest in getting back to work after joining the Goodwill Day Services Clubhouse program. Goodwill's Community Access (CA) staff stepped in, and by August, Sam began working with the CA group.

Sam participated in training lessons that focused on job skills, soft skills, and independent living skills in a group setting. He was a quick and eager learner, an attentive team player, and took so much pride in the work he did. It became clear to the CA instructors that Sam was ready to move to more intensive volunteering in a 2:1 setting with longer shift times.

Sam continued to grow his skills. He worked with an intensive volunteering instructor at Feeding America. They trained Sam to operate the pallet jack by moving pallets from his workstation to other areas throughout the facility. This opportunity nurtured new job skills and helped Sam practice professional behaviors with workers throughout the facility. It was not long before Sam and his instructor applied for the Division of Vocational Rehabilitation (DVR) to set the stage for the next step of his employment journey.

With DVR's assistance, Sam worked with a Goodwill Benefits Specialist, Heather, who conducted a Benefits Analysis. The analysis provides vital information on how work can affect his benefits. The goal was to find a job that worked well for Sam without negatively impacting his benefits.

By December 2020, Sam began receiving Supported Employment Services through DVR and Goodwill. In April of 2021, Sam started as a Bailer Operator at JONCO Industries. The position started as a 4-week Temporary Work Experience (TWE) funded by DVR, which Sam was fine with. He was confident that by the end of the TWE, the job would be his.

During training, Sam carefully listened to the directions his manager gave him. He also looked to his Job Coach when he had questions. His Job Coach, along with his manager, were both surprised at how fast Sam caught on to the job. By the end of Sam's first week, he worked with little coaching. One thing that Sam struggled with was tying bails. Sam’s Job Coach encouraged him not to give up, and eventually, Sam understood what was needed to tie a good bail and did it! Sam was excited and proud of himself. The experience Sam gained through Community Access by volunteering paid off in getting this amazing community job.

In August of 2021, Heather worked with Sam again. At this point, Sam had been working at JONCO for many months and considered increasing his hours. However, Sam and his support team were concerned that an increase in hours would have an impact on his benefits. Heather provided valuable information and discussed a Healthcare program that could potentially save him $170 in insurance premiums with his current hours and over $300 per month with the increased hours. This allowed Sam to make an informed decision about increasing his hours.

When asked what advice he would give to others who want to get a job, Sam said, “Take a shower and wear clean clothes for your interview. Behave in the training room! Make good eye contact and respect your coworkers.” With the support of Goodwill’s programs, Sam continues to succeed! Sam is another fitting example of “The Power of Work” and we are grateful to have been able to serve him.