After coming out of retirement feeling depressed and, in a rut, Jerry came to Goodwill to connect with others and find meaningful work. Originally, he planned to work for a year or two but has enjoyed his job as a production associate so much that he has stayed on board and recently celebrated his 9th anniversary!

Jerry was attracted to Goodwill after he saw an ad in the newspaper. He thought that Goodwill was an 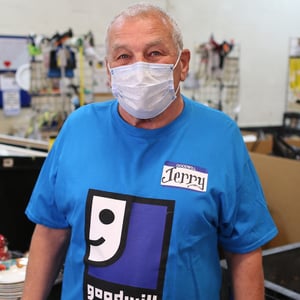 organization doing good things and it would be a nice part-time job. At the Goodwill Store and Donation Center in Northbook, Illinois, he enjoys working in hardliners because he likes antiques and that each day feels like a treasure hunt. However, it’s the relationships he’s built during his time at Goodwill that has made the biggest impact on him. Throughout his time at Goodwill, he has mentored other coworkers and has greatly enjoyed the human connection he gets while working. “You become very close after a period of time and you begin to rely on each other. We all try to help each other, and it’s been a fantastic experience, emotionally, because you make a lot of good friends.”

What surprised Jerry the most about working at Goodwill was all the programs and business operations he didn’t know existed. “Once you’re here working, you learn a little bit more of the mission and there are areas of Goodwill that I never realized existed like laundry, food service, home-delivered meals and more. It’s pretty cool! You feel like you’re accomplishing something and helping people out.”

Jerry also notes that working with younger generations keeps him young. He also loves the diversity he experiences every day. “At Goodwill, you have people from many diverse backgrounds come together. We form a team and enjoy the success of working, getting things done and we have fun too!”