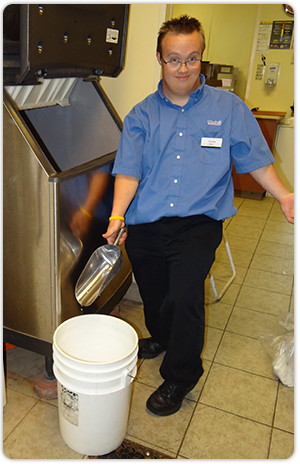 Charlie S. was recently hired at a local Mobil One gas station. Charlie was able to obtain this job with help from Goodwill’s Supported Employment Program and the Division of Vocational Rehabilitation. The Supported Employment Program is all about job developers helping individuals find employment in the community. Once placed, a job coach continues to provide training and support to ensure success and build independence.

One of the first steps was for Charlie and his job developer to meet and discuss various community jobs. After that, Marques began contacting employers and meeting with them to find out more about the employers’ needs and whether Charlie’ strengths, interests and abilities matched with the employment site. One day, Marques spotted a ‘Now Hiring’ sign at a local gas station near Charlie’s home. Marques assisted Charlie with filling out the application, preparing for the interview, and even attended the interview with him. With this support, Charlie was hired!

Charlie currently works four days per week at the gas station and really enjoys what he does. He follows a task planner that his job coach developed to help him stay on track. It includes pictures and a description of the steps involved for each task, which Charlie can check off as he completes.

Some of the things that Charlie works on with his job coach include cleaning and maintaining the coffee and soda area, filling the ice bags for customers and cleaning bathrooms. He also keeps the grounds outside the station clean by emptying garbage, winding the hoses by the self-service vacuum, and making sure the windshield wiper fluid and the paper towel dispensers at each gas pump are full. Charlie has been able to develop great relationships with customers and coworkers and is well known for giving high-fives and telling jokes.

Because Charlie has been able to develop his independence, a job coach is no longer present during his entire shift. Even though long-term job coaching support is provided for all individuals in the program, the ultimate goal is for individuals to become as independent as possible in their positions.

Because Charlie likes to keep busy, he also volunteers once a week at the Wisconsin Athletic Club. His job at the Mobil One station is still his favorite, though, and he has been able to increase the number of days that he works there each week.