Working together for the greater good, Goodwill & MHVI 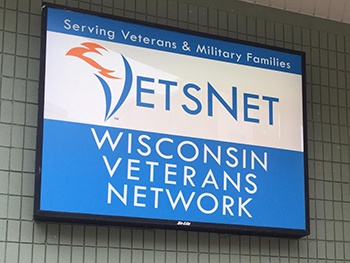 Last month, I had the opportunity to visit the one-stop-shop for those who have served our country and their families, The Milwaukee Homeless Veterans Initiative (MHVI). They have helped 2,600 veterans and families since it was formed in 2008. This year, MHVI launched VetsNet to dramatically increase the number of veterans served and to fill gaps not being met through other organizations. According to MHVI, there are 300-400 homeless vets in the Milwaukee area. VetsNet makes it their mission to decrease this number and support those who have served our nation.

VetsNet eligibility requirement is stated this way "If you wore the uniform, you are a veteran. We are here to help."
During my

tour, Goodwill was recognized as one of the organizations pitching in. Last year MHVI provided furnishings for 343 veteran move-ins. Through our Goodwill Cares program, a partnership with local nonprofit agencies that provides assistance with clothing, furniture and other household items for those in need, they were able to distribute vouchers to shop for additional necessities at Goodwill Store & Donation Centers.

Kirsten Sobieski, Executive Director of MHVI, shared a heartwarming story about one of the last vouchers she distributed in the fall of 2015:

“A veteran we delivered furniture to stopped in on a Saturday just before closing. He wanted to see if we would have a formal dress his daughter could wear to a homecoming dance. That was not an item that we would have on hand, but we looked through some of our donated clothing anyway. We didn't find one. He was disappointed that he would not be able to outfit his daughter for the dance (which was that evening), because he could not afford to buy her a dress. As he was leaving I remembered I had one voucher that had not yet been designated to a veteran. I was thrilled to present him the voucher and told him to hurry to the closest Goodwill! He called the following week to say that God was watching over his family as he and his daughter went to the Goodwill store and his daughter found a dress that she fell in love with. He said he was excited too because he had enough money left on the voucher to purchase an iron and a toaster. “

It's gratifying to know Goodwill supports VetsNet and to see two organizations working together for the greater good.

Julie joined Goodwill Industries of Southeastern Wisconsin, Inc. as Manager of Sales and Business Development in 2013. She brings more than 15 years of management experience in the healthcare and consumer packaged goods industries. She received her MBA from the Kellogg School of Management, Northwestern University and her undergraduate degree from the University of Wisconsin.
Find me on:
LinkedIn