My experience at the EmpowerOne 500 Jobs Event

Posted by Kathryn Henderson on December 21, 2018

The EmpowerOne 500 Jobs Event was held at the Milwaukee County Zoo in October. It was a celebration of the number of individuals that have gained a job and independence through Goodwilll’s Supported Employment and EmpowerOne. Quite a milestone!

Before the event I met my fellow coworker Sara by the penguin exhibit. My inner child had already taken over. I adore animals and hadn't been to the Zoo since last year when I was training to be a Job Coach. I have been working at Goodwill for almost two years, and during those first few weeks I learned about Project SEARCH. I convinced my trainer and supervisor that going to the Zoo to job shadow was a fantastic training opportunity.

As I entered the event I felt a wonderful vibe of happiness! Everyone was dressed up and I was pleased to spot individuals who had graduated from Project SEARCH, and people we assisted through Supported Employment and Community Access, as well as many of our current caseload. There were case managers, employers, Division of Vocational Rehabilitation(DVR) counselors and Goodwill executive team members too. I was excited to have the opportunity to mingle with everyone, especially Jackie Hallberg, our CEO. I enjoyed hearing her speak, which to me made her more real and relatable. I was filled with pride, as I listened to other members of our leadership team speak as well.

I invited two individuals to the event that I have worked with: Trevor, A Project SEARCH graduate, who now works at NASSCO and Colleen, who gained valuable work skills through Supported Employment and is now a bagger at Metro Market. They are success stories in their own right and I knew they would enjoy hearing from other’s who followed a similar path. 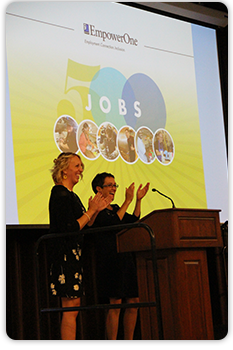 And I was right! The most enjoyable and moving part of the night was hearing the individuals’ stories. Through EmpowerOne, they were able to build the skills and gain the independence they needed to be successful in employment and part of their community. Errnie worked through Community Access and Supported Employment and at the end of her speech, I saw one of my colleagues say "good job” to her. Errine didn't stop though, as she had a special message for her boss who was in the audience. Through tears Errine told her that she was the best boss she ever had!

I could see that for some of the individuals, reading their speeches wasn’t very easy for them. So I listened closely and silently rooted them on. An EmpowerOne team member stood near David, an individual who has worked through Supported Employment, Community Access and Explore Work. He quietly helped David with his words while he was reading his speech. The coaching never stops, I thought. I loved that they were pushing themselves to tell their stories. Their determination and guts were inspiring.

Another example of true determination up on that stage, was from Shamika. I had been one of her coaches during her work experience at Four Seasons Early Learning Center. Because she did such good work, she was offered a job to clean children's toys there. She was the first person that I coached who secured a job in the community! I happened to see her at the James O. Wright Center for Work and Training and ran up to tell her. That girl almost flew out of her wheelchair, just as my supervisor predicted. She was elated getting her first job. The feeling I had witnessing her pure joy was irreplaceable; I wanted more of that. Shamika shared a video of her journey. My name came up on screen, thanking me for being her coach. I thought to myself, “That's me!” I knew how grateful and proud she was, and I was humbled. To be a part of something bigger than yourself and seeing the impact you've made in people's lives makes it worth it. It's a win-win.

Kathryn Henderson began working for Goodwill as a Job Coach in January 2017. She ultimately wants to make a difference in people’s lives and impact them in a profound way. The most rewarding part of her job is helping individuals become hired in their jobs and seeing them grow and become more independent. When she is not driving all over creation working from her “office”- that is her car, she enjoys coming into the Goodwill locations to be with the Empower One team. She is a huge animal lover and is a mom to a spirited, talkative parrot.