Working with Goodwill in a wide range of roles for over 15 years, I have always been impressed with our company’s ability to adapt and grow to best serve our community, but nowhere have I seen a better example of this than the recent improvements that have taken place within our Linen and Laundry Operation. Not only have machines been replaced and training improved as one would expect, but we have fundamentally changed the way things are done pretty much from start to finish.

Following the processing of the actual linen one of the first big improvements is the way in which the soiled linen is sorted. What used to be done on a hip tall table is now being done on a raised platform allowing the staff to sort linen down rather than the old way of having to toss the linen up into a cart. This is not only more productive for the staff but also safer in reducing the strain from repetitive movements as well. 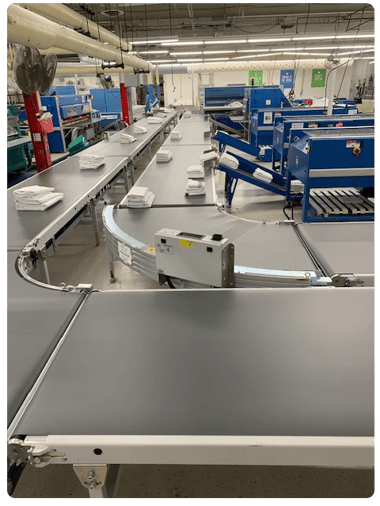 After being properly sorted, washed and dried the next step for the linen is the linen processing and another major improvement to our operation. Within the last six months our Goodwill Laundry operation installed a full conveyor system to not only better manage our work flow but also lessen the strain on our employees. While the transfer of linen from the machines to the final stocking area used to be a manual operation involving repetitive bending and pushing of large carts this is now all achieved by directly transferring the linen to the stocking area. As a result, not only has this essentially doubled our production rate but just as importantly our employees are working safer and feel more important to the operation. As one employee put it, “we used to look like a bunch of ants all going in our own direction, now we are all working the same way.”

And our plans for improvement don’t stop there. By the end of 2019 we hope to have fully implemented advanced software which will allow us to track not only our customers carts and linen in real time but also provide on demand reporting on all aspects of operations. With just a tap of their phones our managers will be able to monitor the status of production from anywhere and customers will be able to see the status of their next delivery.

We are proud that our operation is using process improvement to better serve our customers.

Josh Latawiec began his career with Goodwill Industries in 2003 and is now Senior Account Manager of Linen & Laundry Services. In his current role, Josh focuses on the satisfaction of current Laundry customers, as well as, the addition of new customers as Linen & Laundry Services continues to expand into the hospitality market. Previously, Josh held a management position within Goodwill Retail Store & Donation Centers and he also spent time as a Job Developer with Supported Employment where he directly assisted individuals with disabilities find community employment.
Find me on:
LinkedIn