Before coming to Goodwill, Creighton and his family were uncertain where his life was heading due to his intellectual disability. Through the Power of Work, Creighton is a shining example of how meaningful work has transformed his life. 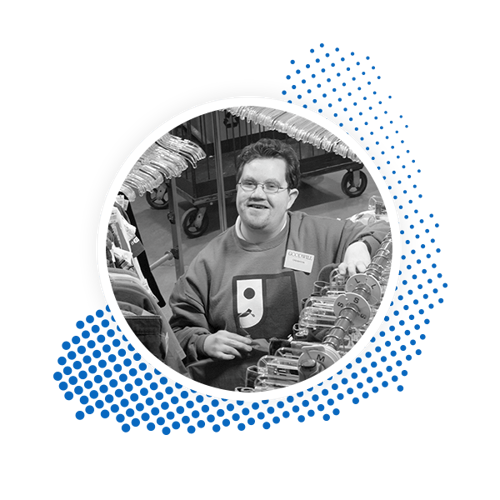 A lifelong supporter of Goodwill, Creighton learned to count money by shopping at Goodwill Store & Donation Centers with his mom. He was always excited to come home with new treasures. After he suffered a serious illness, Creighton’s mother, Toni, knew it was time for Creighton to find a job that would not only lift his but also give him purpose.

Knowing Creighton’s love of Goodwill, Toni encouraged him to apply for a job. He filled out an application, and his energetic personality and tenacity landed him the job at the Goodwill Store & Donation Center in Delavan. Once hired, Creighton utilized the support of a job coach during his first months of employment to ensure his success.

Having a job has given Creighton a new-found sense of independence, and he is thriving. He has his own apartment, is involved in many activities with friends and family and has remained active in the Goodwill family, both as a spokesperson for the Goodwill mission and as a valuable Team Associate. Fellow employees love working with Creighton because of his positive attitude and strong work ethic. He rarely misses a day of work because he enjoys his job so much. As Creighton says, “I love working with my coworkers!” He has an enthusiasm that is infectious, and his coworkers say they miss him when he's not there.

Creighton has become that man he always knew he could be–independent, joyful and eager to contribute to the world around him. His attitude and work ethic are shining examples of the Goodwill mission.

“I love working with my coworkers.” – Creighton

“When he’s not here, we miss him.” – Creighton’s Coworkers